● electromagnetic spectrum owned by the state, is the core of strategic resources for national development, promote social progress

● direct support operations of the electromagnetic spectrum, is building computerized armed forces and winning the information war of the central nervous system

Soul of the information war: the electromagnetic spectrum 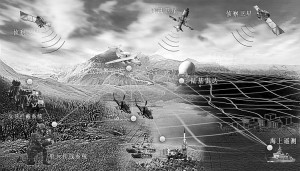 Electromagnetic spectrum exists in war by land, sea, air, space the whole time and space, is the only ideal medium capable of supporting mobile operations, decentralized operations and high intensity warfare. Important support elements of the electromagnetic spectrum management as joint operations, throughout the operational readiness, operational planning, operational implementation of the entire process, the role of command and control, intelligence and reconnaissance, weapons guidance, early warning and detection, navigation and other operational elements of the whole, is to improve the combat Important basic capabilities directly related weapons and equipment play information Operational Effectiveness.

Electromagnetic spectrum Past and Present

Electromagnetic spectrum, it is by electromagnetic waves lined up according to wavelength or frequency, a formed structure from zero to infinity pedigree, which 0-3000 gigahertz frequency range of radio waves.

Back in October 1492, Christopher Columbus discovered the American continent. However, the future Queen of Spain, six months before he heard the news, unfortunately sudden and devastating. April 14, 1865, US President Abraham Lincoln was assassinated 13 days after the news spread was known industry’s most advanced British government, coping strategies are overtaken by events. Electromagnetic time unknown, human nature can not enjoy its magic.

In 1888, German physicist Hertz experiment is successful, humans finally touch the existence of electromagnetic waves. In 1901, as the “father of radio” Marconi trans-Atlantic radio communication test is successful, humanity has entered the era of electromagnetic radio communications sweeping the globe. In 1912, after the Titanic wreck, the United Kingdom, the United States and other maritime powers mandatory over a certain tonnage of the vessel must be installed radio stations, in order to protect the safety of life at sea. During World War I, the war all the major powers use radio communication to pass information and commands.

Since then, radio broadcasting, navigation, remote after another, to the development and progress of human society has brought great changes. Electromagnetic wave as an important carrier of information transmission, dash in land, sea, air, space four-dimensional space, accelerate the coming of the information age.

Electromagnetic spectrum is the only human transmission of information over wireless media, owned by the state, land, forest, mineral and other resources, as it is both a scarce natural resource in the areas of economic development, national defense and social life indispensable , irreplaceable core strategic resources.

At present, humans can use the radio spectrum in the 275 gigahertz or less, mainly concentrated in the range of 30 Hz to 40 gigahertz, but most are in the 3 gigahertz or less, high-quality resources is extremely limited.Therefore, the world has become intense competition for them.

Frequency satellite orbit resources, for example, known as the 80% share of the “golden navigation frequency”, the US GPS and Russian GLONASS navigation system first to seize the countries in the world have to compete for the remaining resources.

Electromagnetic spectrum is widely used in the economic, military and other fields, combined with the scarcity of resources prominent contradictions, it gradually from the back to the front, electromagnetic space and the game become the world compete for important battlefield.

Although the electromagnetic spectrum is present in the natural space, invisible, but it does not mean that the State, organizations and individuals are free to use occupied.

According to the US Army website reported, the United States developed a new Joint Tactical Radio System, which contains the spectrum defragmentation technology, is not a continuous spectrum of debris re-polymerization, to achieve the integration of resources to meet the needs of purpose. European development of the “Spectrum pool” technology, but also the integration of free spectrum resource collection, and dynamically allocated based on customer needs, improve efficiency in the use of the spectrum.

Now, the world’s major countries are seeking to develop spectrum sharing technology, without changing the existing spectrum allocation rules, through technical analysis tools simulate actual combination, so that different systems can share the same frequency band compatible. In addition, many countries and organizations through the use of advanced signal transmission technology, using a frequency equipment to improve the level of technology, and other means to control the transmission frequency, both to avoid the deterioration of the electromagnetic environment, but also to achieve efficient use of spectrum.

“The 21st century will be the era of the spectrum war”

Faced with escalating competition in the world of the electromagnetic spectrum, the US military has issued a joint spectrum vision, strategic planning and the Department of Defense Spectrum “Spectrum war” and other top-level strategic guidance documents, and to take away from the crowded band, the development of high-end spectrum, etc., developed microwave , laser, electromagnetic pulse weapons, etc., to actively seize the spectrum.British forces widely promote the use of intelligent and efficient radio modulation techniques to improve spectrum utilization efficiency of a wireless communication system.

Classic examples of the electromagnetic spectrum

In 1914, the US Navy Atlantic Fleet in the first trial under the state of war radio communication equipment, results strongly spark near neighbor ship transmitters interference interrupt all radio communication, the participants had to make time allocation plan, assigned to the United States for two hours domestic radio transmitter, the other four countries 1 hour each. Thus, the Washington-based headquarters to an interval of 4 hours to its armed forces on the battlefield contact again.

April 1980, the US Joint Task Force and local school Rangers joint implementation embassy hostage rescue mission in Iraq. In its way to evacuate due to a communication device and the Rangers are not compatible with the frequent collaboration errors, resulting in a helicopter and transport aircraft collided, eight commandos were burned to death and four serious burns.

May 4, 1982, the Falklands War, the British naval weapon known as a symbol and pride of the fleet, “Sheffield” cruiser by satellite communication and radar systems are not compatible, can only start work in turn, the result was Argentina “Super flag “aircraft launched the” flying fish “missile sunk.

June 9, 1982, the fifth Middle East war, Israel intercepted prior use of the Syrian army radar and “Sam” spectral parameters of the missile launch, just 6 minutes will be stationed in the Bekaa Valley which cost $ 2 billion in 19 “Sam” air defense missile sites completely destroyed. In the next two days of combat, Israeli fighter planes and electronic jamming aircraft with combat, created a miracle in the history of air combat.

May 2011, the US Navy Seals and Special Air Service regiment battle the implementation of “Neptune Spear” initiative. SEALs use of “Land Warrior” soldier system, and joint operations center for situation analysis and sharing of intelligence, special operations group UAV crew via satellite communication system commando operations return the White House and the Pentagon. Throughout its action, the US military weapons systems use spectrum resources covering all channels, in just 40 minutes, successfully kill Osama bin Laden.